Not all files can be replaced - at least not easily. But if you’ve lost or accidentally deleted an irreplaceable file, not all hope is lost just yet. There’s a good chance that you’ll be able to get it back using one of the top 7 free file recovery software for Mac OS X described in this article.

Disk Drill is a complete data recovery package designed to quickly and painlessly recover deleted partitions or deleted files from your Mac’s internal drives as well as various peripherals, including iOS and Android devices. 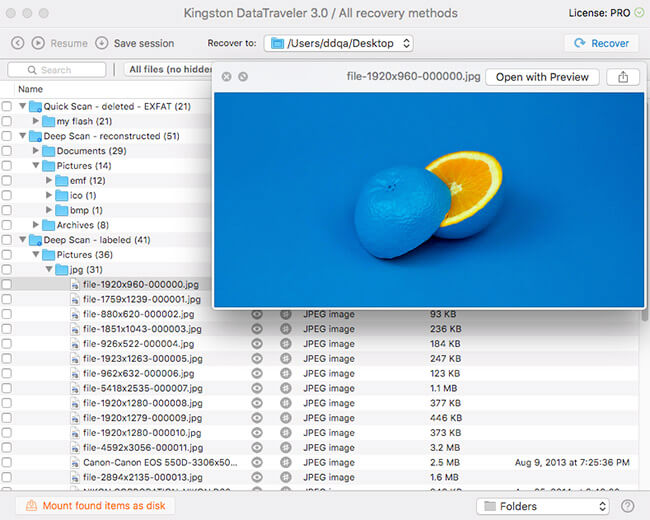 There are many file recovery software solutions for Mac, but only a few feel like true Mac apps. And out of those that are designed in accordance with Apple’s GUI guidelines, a small fraction delivers satisfactory results. Disk Drill is the best free file recovery software for Mac because it offers professional data recovery features in a sleek package.

With Disk Drill, it doesn’t matter what type of file you want to recover and from which device. This file recovery software supports hundreds of file formats and all commonly used storage devices, including Android and iOS smartphones and tablets.

Regardless of whether you need to recover a single document from your system drive or thousands of pictures from a memory card, it always takes just one click on the Recover button to get the job done. To reassure you that you’re recovering the right files, Disk Drill can preview the same file formats as your Mac.

To recover deleted files on Mac using Disk Drill, you need to:

Included for free in the basic version of Disk Drill are Recovery Vault and Guaranteed Recovery, two handy data protection features that allow Disk Drill to monitor your file deletion activity and retain metadata so that you can quickly and easily recover any deleted file with 100% success rate.

TestDisk is a free and open-source file recovery software application created by Christophe Grenier. While its main purpose is to recover lost partitions and fix boot issues, it can also be used to recover deleted files. 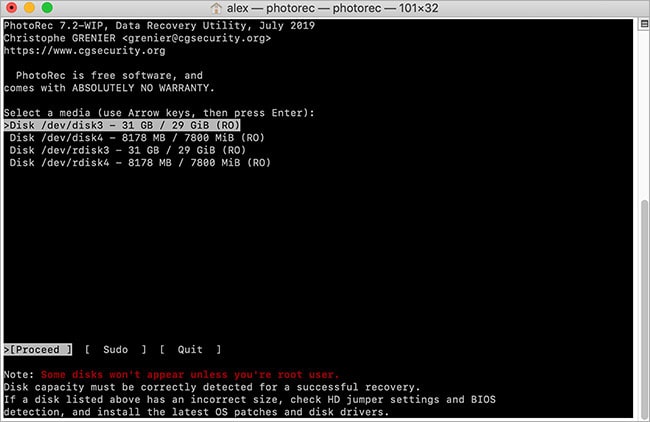 TestDisk is an open-source, freeware file recovery software application licensed under the terms of the GNU General Public License. It runs on many operating systems, including the newest versions of macOS (the users of macOS Catalina can install TestDisk via Homebrew, but there are some known issues). It was originally intended to recover lost partitions and fix boot issues, but its developers have gradually turned it into the multi-purpose file recovery software it is today.

Despite being completely free, TestDisk supports most file formats and file systems, including FAT16 and FAT32, exFAT, NTFS, HFS, HFS+, ext2/3/4, LVM and LVM2, ReiserFS, and others. Unfortunately, not all file systems are supported equally well, so some can be repaired and recovered, while others can only be scanned for lost partitions.

But the biggest limitation of TestDisk, at least for regular users, is its command-line user interface. Not that the interface is unreasonably complicated or unintuitive, but less experienced users tend to feel intimidated by it. If you’re among those who are afraid of command-line applications, we recommend you read the official documentation before you throw in the towel.

Lazesoft Mac Data Recovery is a free file recovery software tool that enables you to recover an unlimited amount of data with no financial investment whatsoever.

Even though Lazesoft Mac Data Recovery has been around for some time, most younger Mac users have never heard of it. That’s probably because it doesn’t officially support the latest version of Mac OS X. That said, we were able to get it to run on macOS Catalina just fine and use it to recover deleted images.

Besides images, Lazesoft Mac Data Recovery can also recover audio files, videos, documents, and many other file format families from HFS/HFS+, FAT, FAT32, NTFS, and exFAT file systems. You can either run a fast scan to quickly recover files from a working storage device or select the deep scan option to first recover a lost, deleted, or damaged partition.

Regardless of which of these two options you select, you can start looking for your files even when the scan is still being conducted, which makes the recovery process go a bit faster. Unfortunately, it seems that developers of Lazesoft Mac Data Recovery will never update this file recovery software to officially support the latest version of Mac OS X because the last update was released in 2014.

File recovery is a complicated process, but iSkysoft Data Recovery makes it simple with its user-friendly interface and three-step recovery process. 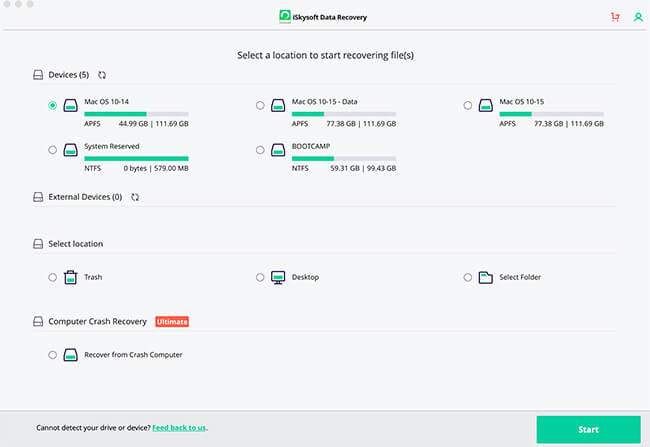 iSkysoft Data Recovery supports any type of storage device that uses a common Mac, Windows, or Linux file system. It runs on Mac OS X 10.6 and newer and can be used to recover photos, documents, music files, and just about any other type of file found on your Mac.

One of the main goals of its developers is to make iSkysoft Data Recovery so intuitive that even users who have never recovered files before can launch it and instantly figure it out. We can say that this goal has been accomplished nearly perfectly. File recovery with iSkysoft Data Recovery requires just three simple steps, and the application makes it abundantly clear where you need to click next to get your files back.

With the free version of iSkysoft Data Recovery, you can recover up to 1 GB of data. To unlock unlimited recovery, you need to purchase one of the three available licenses, which start at $79.95.

Using this tool, you can recover files from virtually any storage device compatible with your Mac, such as an external hard drive, USB flash drive, or SD card. The M3 Mac Data Recovery can recover deleted files from an emptied Trash Bin as well as from deleted logical volumes. A pre-recovery preview function allows you to view deleted files before you recover them.

M3 Mac Data Recovery can read encrypted APFS volumes and recover deleted or lost files from them just as effortlessly as from all other unencrypted volumes. You can choose between two equally useful scanning modes: Quick Scan and Deep Scan. The former takes less time, but it can miss some hard-to-recover files. The latter can take hours to complete, but it delivers the best file recovery results.

The free version of M3 Mac Data Recovery lets you recover up to 1 GB of data free of charge. The least expensive paid version of this file recovery software application costs just $69.95, but it doesn’t support encrypted APFS volumes. To recover files from them, you need to pay $99.95 for a Professional license.

PhotoRec is a companion product to the partition recovery tool TestDisk, and it specializes in recovering lost images from hard drives, memory cards, USB flash drives, CD-ROMs, and other storage devices. 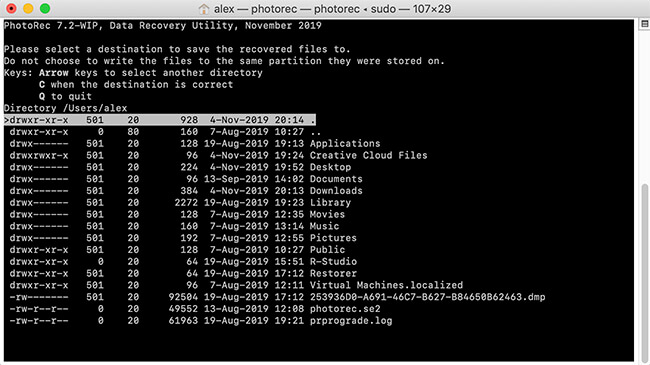 PhotoRec shares many similarities with its sister application, TestDisk. They both have a command-line interface known for turning away users who have limited experience with data recovery and computers in general, they are both distributed under GNU General Public License (GPL v2+), and they both recover deleted files from a wide variety of storage devices.

The difference is that TestDisk is a partition recovery tool, whereas PhotoRec is a general-purpose file recovery software application with support for more than 480 file extensions (not just image file formats, as its name suggests).

Exif Untrasher is a free Mac file recovery software tool that was developed with a single purpose in mind: to recover JPEG images from physical storage devices and disk images. 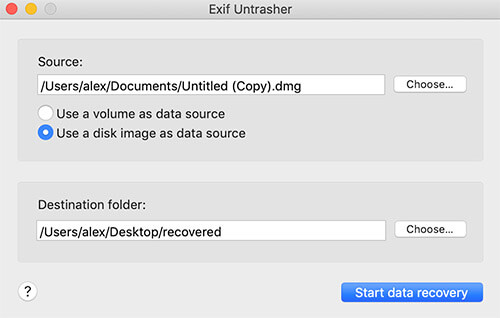 Developed by software developer Carsten Blüm, Exif Untrasher is the most straightforward free file recovery software that we wouldn’t hesitate to recommend to all Mac users. It’s designed to painlessly recover JPEG images from physical storage devices and disk images. Yes, this file recovery software doesn’t support any other image file formats, so you better look elsewhere if you need to recover documents or videos.

Because Exif Untrasher does just one thing, it can do it exceptionally well. To recover images with it, you simply select a physical storage device or disk image, specify the destination folder, and start the recovery process.

Exif Untrasher runs on Mac OS X 10.10 or higher and is localized in English, German, French, and Italian. You can download it directly from the developer’s website and install it just like you would any other third-party Mac application.

Comparison of the Best Data Recovery Software for Mac

How Does Data Recovery on Mac Work?

Data recovery app for Mac takes advantage of the fact that Apple designed its operating system to be as efficient as possible. When a user deletes a file on a Mac computer, the operating system simply marks the physical storage space occupied by the file as available but doesn’t actually delete it.

Instead, the deleted file remains physically present on the storage device until the operating system overwrites it with new data. Before that happens, it’s possible to recover it using one of the data recovery apps listed in this article.

Can Data Recovery Be Performed on All Versions of macOS?

While newer versions of macOS require users to grant data recovery apps some additional permissions, the actual recovery process remains the same regardless of which version you choose. That said, you need to verify that your data recovery app of choice supports the version of macOS you have installed on your computer.

Here’s a list of all versions of macOS and Mac OS X that were released in the last 10 years:
As you can see, Apple decided to rename its operating system to macOS with the release of macOS 10.12 Sierra.

Which Storage Devices Can Be Recovered?

The best data recovery apps for Mac can recover deleted and lost files from all storage devices available to Mac users, including:

How do we choose data recovery software for Mac?

Are there any completely free Mac data recovery software applications?

Yes, there are. TestDisk for Mac is our favorite completely free Mac data recovery software application because it’s open-source and supports most file formats and file systems. Other options include PhotoRec, Exif Untrasher, and Lazesoft Mac Data Recovery.

How to restore deleted files on Mac from the Trash?

Follow these steps to recover deleted files from Mac’s Trash:

How to recover deleted files on Mac using terminal?

When faced with a lost or deleted file, don't despair. These software packages can help you recover those lost files. Using Disk Drill’s data protection capabilities before a data loss event occurs will give you peace of mind that you can always recover an accidentally deleted file. Download the application today and have it working behind the scenes to protect your data before an unfortunate data loss scenario.

How Disk Drill serves other users