You’ve been working on your computer and you go to save a file as you want to preserve your work. While saving the file, something happens during the save process. Maybe the app you’re using crashes, or your computer suddenly restarts.

You go back to continue your work and the file is corrupted! You can’t open it and your operating system is now displaying an error every time that you go to try and open it.

The good news is that there are ways to recover corrupted files on Windows and in this article we’re going to look at what a corrupt file is, how does it happen, and how you can recover a corrupted file.

What Is a Corrupted File?

In short, a corrupted file is one that has been damaged. All of the data on your computer has a structure to it and when this structure is damaged or interrupted, it can cause a file to become corrupt.

This can cause the file to no longer open and your operating system may not know how to handle the file anymore. If you do try to open it, the app may crash as there is missing data that causes the program you’re using to not understand what to do with it.

How Do Files Get Corrupted?

There are multiple reasons that a file may be corrupted. I will list some of the most common below:

The good news is that there are multiple ways to recover corrupted files as Windows and other apps take into consideration that there can be instances where apps or computers can crash.

Below, I will look into some of the best ways that you can go about recovering corrupted files and getting back your data.

The simplest way to get corrupt files back is simply copying them from the original source. Most files on your PC that aren’t system files (i.e., files that Windows adds when installed) are usually obtained from an external source and can be reobtained.

For instance, if the corrupt file you’re trying to use is a setup file for a tool you want to install, go to the tool’s website and download the setup file again. If you received the file, for instance, a movie as an mp4 file that has become corrupt, you can ask your friend for the file again.

You can also convert some file formats using the tools you already have on your PC, provided you’re at least able to open the file. For instance, when a Word document becomes corrupt, some of its content may not appear, but the file will still open. You can go to File > Save as and save the file as a PDF document. 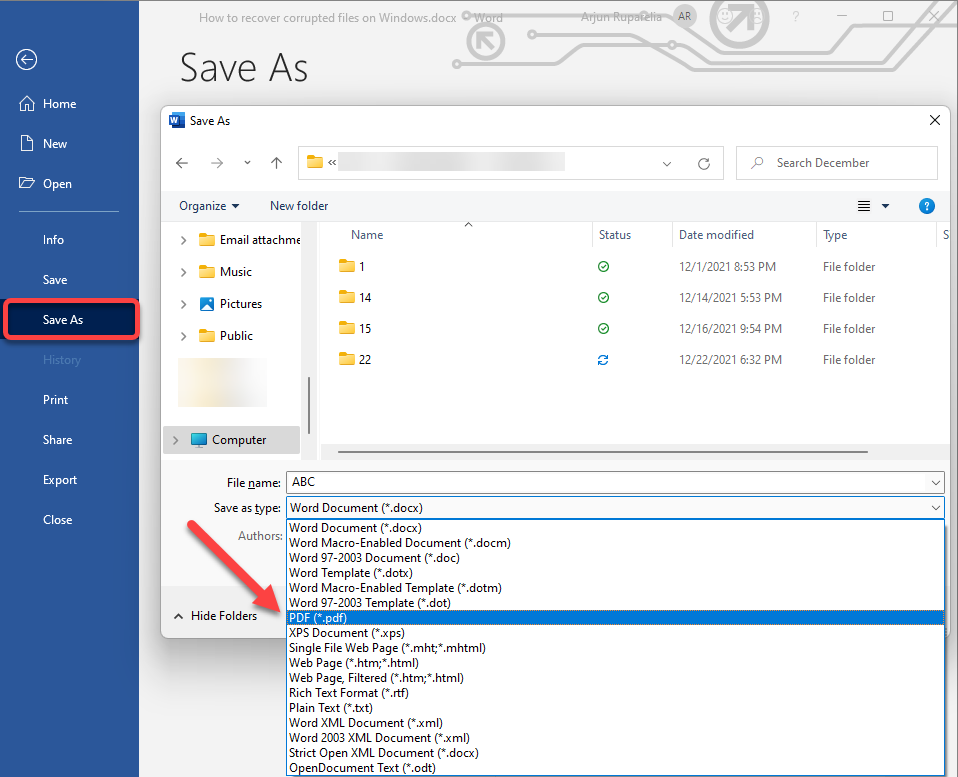 Previous versions are copies of files that Windows creates as part of a backup or as a restore point. Previous versions are sometimes also referred to as shadow copies and they’re created automatically by the Windows operating system, so this isn’t something that you would have had to set up ahead of time.

If you have a corrupted file, most likely you can right-click on it and restore it back to a previous version or shadow point which, would allow you to recover a file should it become corrupt.

Restoring corrupted files using Previous Versions is quite easy and I will walk through it in the steps below.

Step 1. Find the folder or file that you want to restore to a previous version of.

Step 2. Right-click on the file or folder and select Restore previous versions. 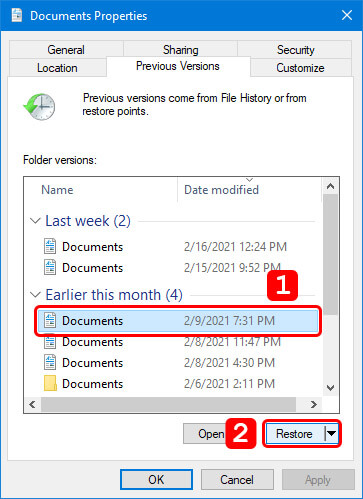 Step 4. After you have clicked on Restore, your computer will restore back to the previous version of the file and it should no longer be corrupt!

Sometimes there may not be a previous version of the file you’re trying to restore to and that is where a backup comes into play.

After years of being in the computer industry, I can attest that backing up your computer is one of the best things that you can do for your data. Recovering corrupted files from a backup is really easy to do and it only takes a few steps. 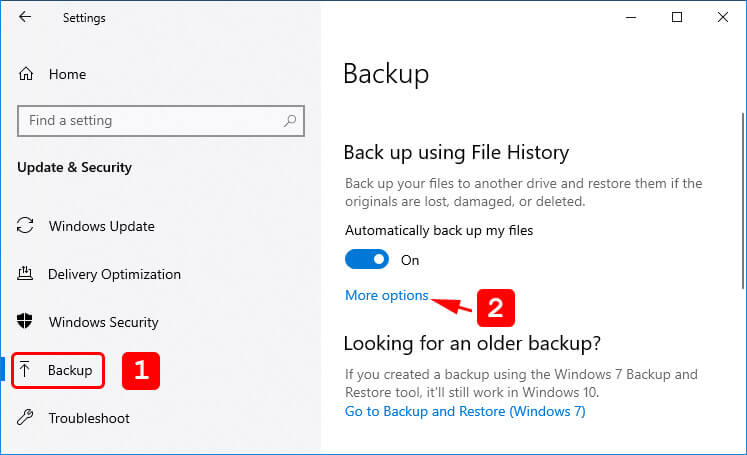 Step 2. If you have a backup set up, it will appear here. You can then retrieve corrupted files by selecting the backup and then waiting for it to restore to a previous point. 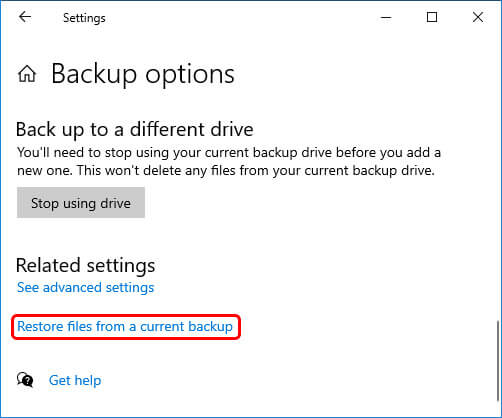 If you don’t have a backup showing up after following the steps above, you most likely don’t have one and I would recommend that you start backing up your computer to ensure that your data is saved.

There are other ways to recover corrupted files which we will take a look at below.

Many apps these days offer built-in data protection against things such as app and computer crashes. Microsoft Office is a prime example of a software service that offers amazing protection for your data.

Since most of us use Microsoft Office, we can take a look at how to recover a corrupted file using Word. If you’re using something such as Microsoft OneDrive or Google Docs, then this most likely wouldn’t be something that you would need to consider as your data is constantly being saved via the cloud.

However, due to privacy concerns and depending on what you’re working on, you may not be able to save your data to the cloud or you may have other reasons for not doing so. In the steps below, I will go through how to recover a file from Microsoft Word but these steps will apply to most of the Microsoft Office apps and the steps shouldn’t change by much.

Step 1. Launch Word or any Office product as the steps should be nearly the same.

Step 2. Go to the navbar and choose File > Option > Save.

Step 3. Within this window, you can find the AutoRecover location for where your files are being saved to. You can also see how often AutoRecover is saving your work for you. You can note on mine, that it is saving every 10 minutes and that this is the default setting.

Step 4. From within this screen, you will be able to see where your files have been saving to which will allow you to locate and restore corrupted files.

Method 6: Use the Chkdsk Utility

Some files can appear corrupted if the disk they’re stored in has filesystem errors or undergone physical damage (also called bad sectors). Chkdsk is short for Check Disk, and it’s a built-in utility that tries to look for file integrity violations or bad sectors on your disk and fix them automatically.

There are two ways you can use the Chkdsk utility on Windows. We’ll walk you through both methods so you can pick the one you feel more comfortable with.

The utility is accessible from within the File Explorer. To run Chkdsk:

If you’re comfortable using command lines, you can also run the Chkdsk utility from the Command Prompt:

Here’s what the switches in the command mean:

Once the scan completes, it will have fixed all filesystem errors or soft bad sectors that it finds or reported issues that it can’t fix. However, Chkdsk isn’t the best tool if you’re dealing with a corrupted system file. For such files, you’ll need the SFC tool.

System File Check (SFC) is a built-in utility that scans for corrupt system files and fixes them. Windows saves a cached copy of all your system files in the System32/dllcache folder. When you run the SFC utility, it scans all protected system files to see if any have become corrupt. If it finds corrupt files, it replaces them with a cached copy of the file. If the corrupt file you’re trying to recover is a system file, here’s how you can use the SFC to repair it:

If you want a more hands-off solution, you can use file repair tools like Stellar Microsoft Office Repair Toolkit or Repair Toolbox. The success rate of each software typically depends on how smart it is.

Files can become corrupted because of viruses, buggy software that didn’t write the file correctly, or some event that caused the file’s data to become disorganized. So, the chances of success when using a repair tool also depend on how damaged or corrupt the file is.

It’s important to note that no matter which file repair tool you use, it will only repair minor corruption issues. If a large portion of your file’s data is missing, the repair tool—no matter how expensive—won’t be able to recover the file.

If the steps above didn’t work, you may be able to recover a previous version of it that will open and function using third-party data recovery software.

Disk Drill can recover files and all other sorts of data. It can do this by scanning your computer and finding files that are there, but may not be visible to you. With a corrupted file situation, Disk Drill may be able to recover a previously working version of the file that will open and function on your Windows machine. Data recovery software can’t fix corrupted files, but if there is another working version of the file, it may be recoverable.

The best way to know if the file is recoverable is if the preview function is working when looking at the files that Disk Drill was able to find after the scanning process has finished, which I will point out in the steps below.

Once you notice that a file is corrupted and not opening on your machine, it is best to stop using your computer as saving new data to it will make it harder for Disk Drill to recover data. If you can load Disk Drill onto an external hard drive or thumb drive, that will increase your chances of data recovery.

Step 1. Download and install Disk Drill for your computer. 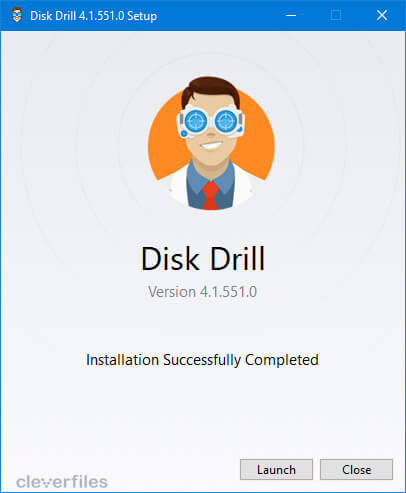 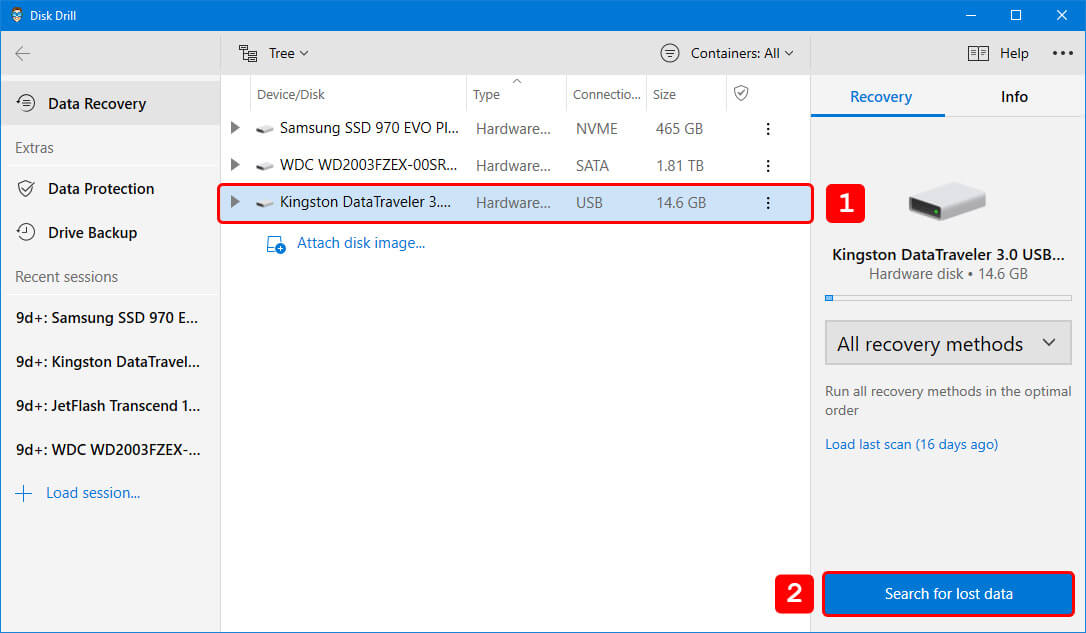 Step 3. Wait for the scanning process to complete.

Step 4. After the scan has completed, you will be greeted by all of the found files that Disk Drill was able to recover. If you’re able to preview a file, then Disk Drill is able to recover it most of the time. This is a good indication that you can recover a previously working version of a corrupted file. 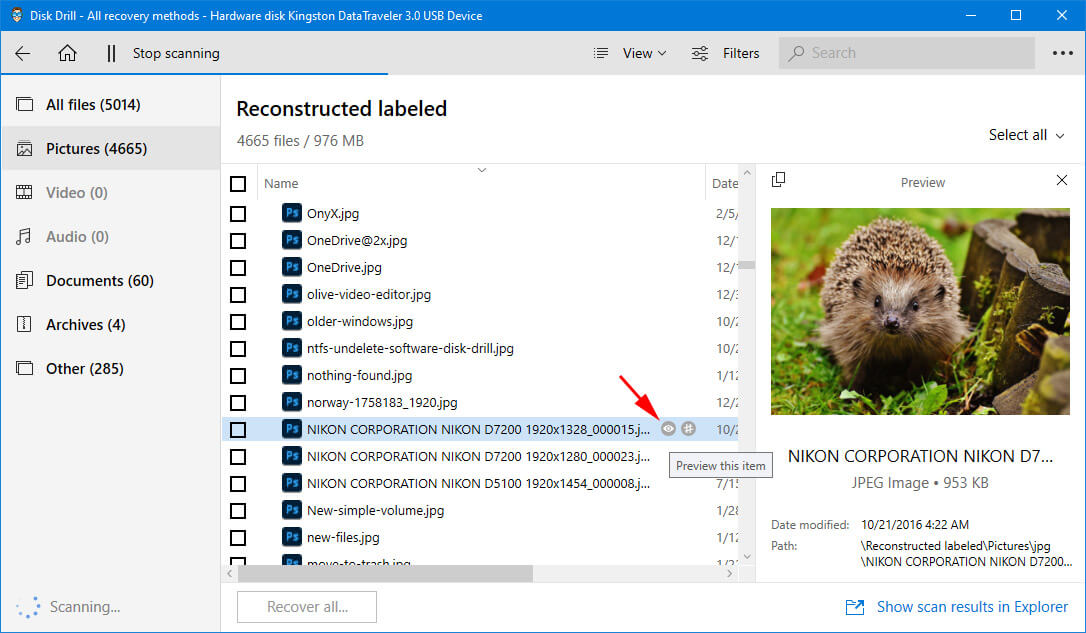 Step 5. Check the files that you would like to recover and then choose recover. 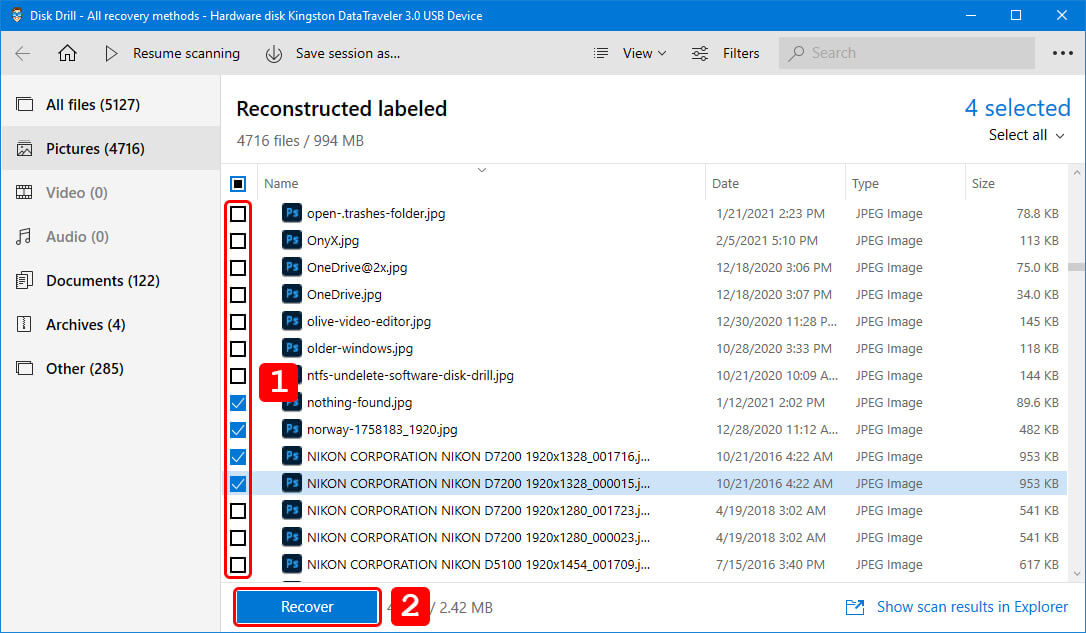 Step 6. Choose a path for Disk Drill to recover the corrupted file to.

Step 7. You will then be greeted by a confirmation message letting you know that the recovery was successful. 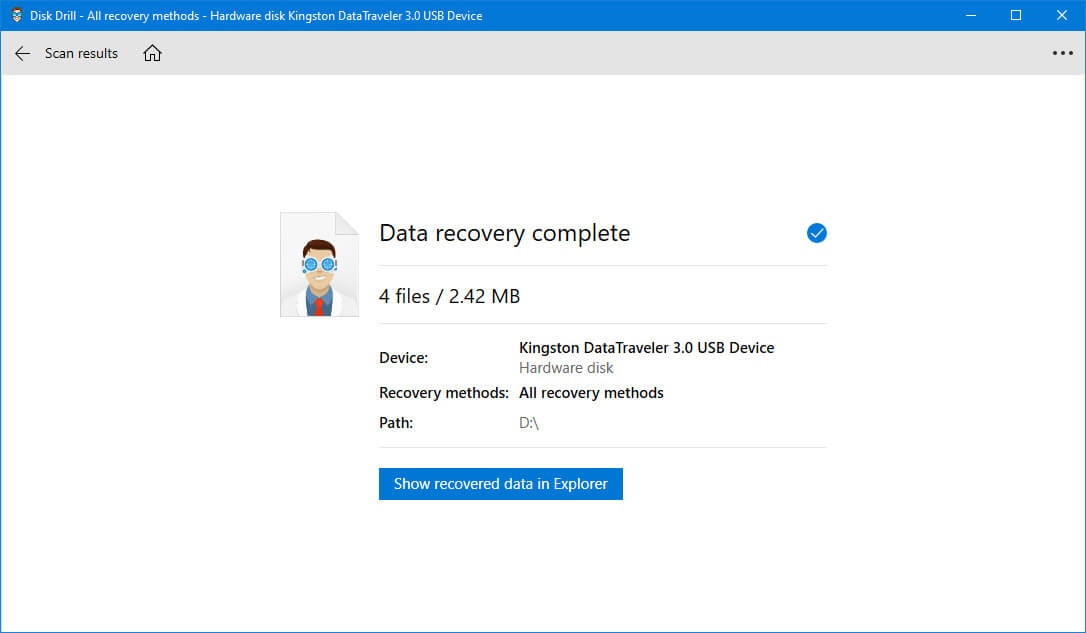 Computers run reliably most of the time but there can be instances where something can happen that can cause file corruption. The good news is that there are multiple ways to recover this data and get it back onto your machine.

Through backups and built-in software solutions, you can keep your data safe and if those don’t work, you always have third-party data recovery software that can help you recover a previously working version of a corrupted file. 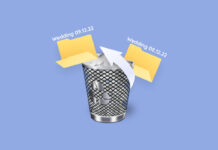 How to Recover Deleted Files with Original Names 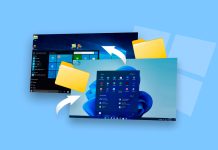 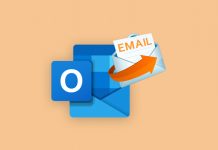 How to Easily Recover Deleted Emails in Outlook 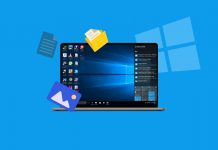 How to Easily Recover Deleted Desktop Files in Windows 10 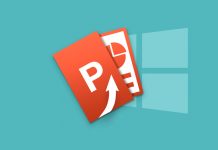